What is the Just Transition Fund?

The European Union’s Just Transition Fund (EU JTF) is a brand-new fund created under the 2021-2027 programming round. It operates under Regulation (EU) 2021/1056 within the framework of the EU Cohesion policy.

The Fund’s single specific objective is to support the regions and communities in Europe that are most negatively affected by the transition to climate neutrality, ensuring that no one is left behind.

In essence, the EU JTF aims to address employment, economic, social and environmental impacts that come with the shift away from carbon-intense activities. In Ireland’s case, the territory supported by the Fund will focus on the regions where there have been direct impacts from the move away from peat production and electricity generation from peat.

Ireland is set to receive up to €84.5 million from the EU Just Transition Fund over the period to 2027. With the Government of Ireland’s match funding using Exchequer resources, up to €169 million will be available.

As required in legislation, Ireland has prepared a Territorial Just Transition Plan and accompanying Programme setting out the activities the Fund supports. With the European Commission’s recent adoption of Ireland’s Territorial Plan and the JTF Programme, activities under the programme will begin rolling out in early 2023.

Several evidence-based assessments have identified certain counties and municipal districts in the wider Midlands as being the most negatively affected in Ireland by the closure of peat-reliant power stations. This will therefore be the target area of the EU JTF.

The territory will consist of the counties and municipal districts indicated in the map below.
This territorial designation was approved at Government level on the basis of:

These reports can be found on this www.gov.ie page. 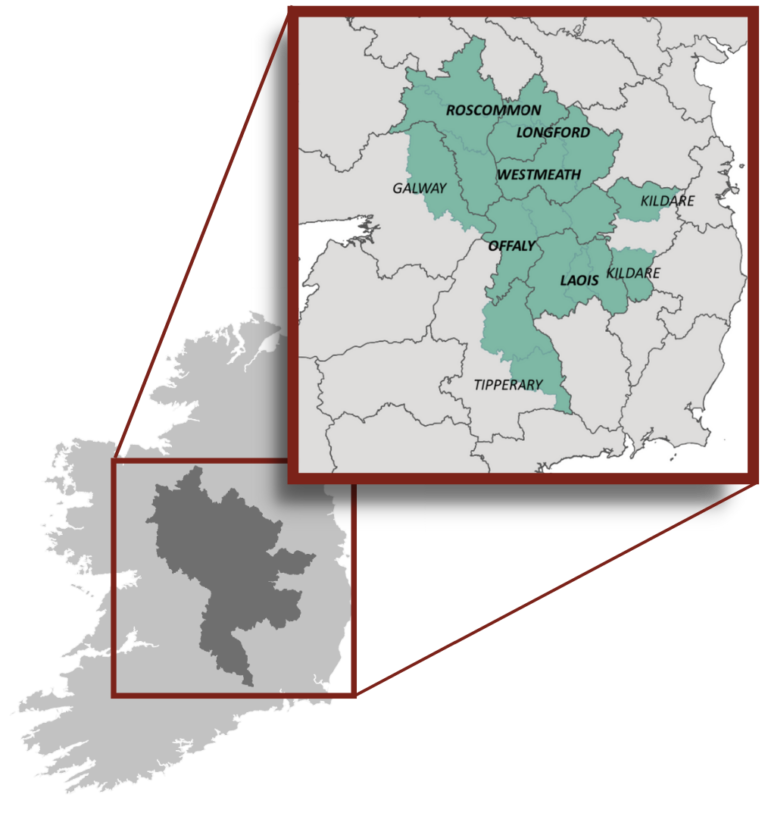 This map shows the territory where the EU JTF will focus activities.

What does EU JTF fund

The EU Just Transition Fund in Ireland has 3 priority areas for investment:

These priority areas are designed to complement each other to address employment, economic, social and environmental impacts from the cessation of peat production for energy generation in the wider Midlands area. They are also complemented by other EU funding programmes.

Find out more about other EU funding programmes on our site.

Have any questions for us? Email us at: eujtf@emra.ie

Sign up to keep updated with the latest information: Fill out this online form
(note: form is hosted on Eastern and Midland Regional Assembly page, the Managing Authority of the EU JTF)